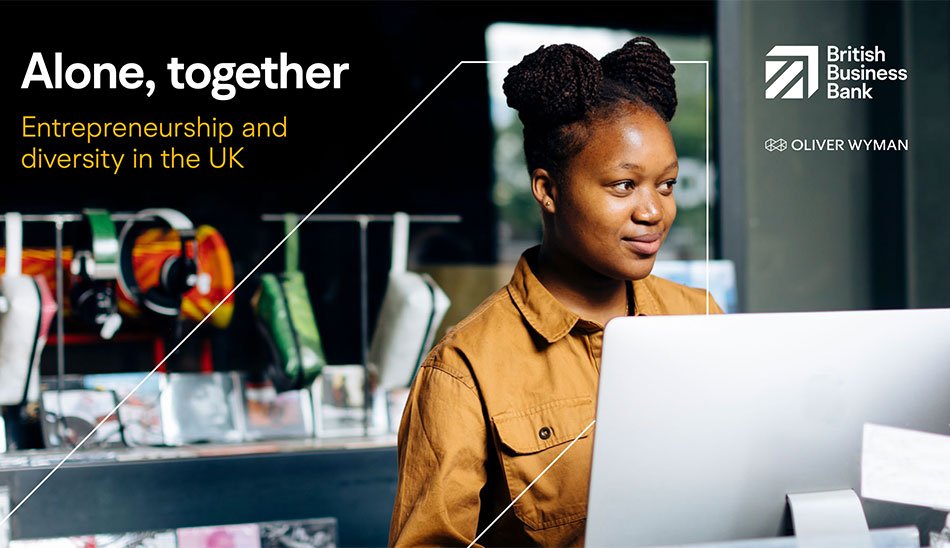 Black business owners and those from Asian and Other Ethnic Minority backgrounds face persistent disparities in business outcomes, with systemic disadvantage playing a key role. This is revealed in a new report Alone together: Entrepreneurship and Diversity in the UK, published today by the British Business Bank and Oliver Wyman.

The report examines the profound effects ethnic and economic background, gender and geography have on business outcomes. The research will feed into the Commission on Race and Ethnic Disparities established by the Prime Minister.

The success rate for starting up a business for Black entrepreneurs is in line with the UK average. However, entrepreneurs from Asian and Other Ethnic Minority backgrounds have a significantly lower success rate, making up around 3.5% of business owners but more than 8% of those who wanted to start a business but did not succeed.

These disparities persist despite Black, and Asian and Other Ethnic Minority entrepreneurs investing more time and money when developing their business ideas. Entrepreneurs in these groups also typically have higher level of educational attainment compared to those from a White British background.

Such differences in business outcomes can therefore only be explained by a host of interconnected and systemic factors. These include differences in access to finance, social capital, deprivation and household income, as well as the under-representation of certain ethnic groups among managers, directors and officials in the workplace, which reduces the opportunity to develop business-relevant skills, knowledge and networks.

Societal inequalities and established gender roles, such as having primary caring duties for children and elderly relatives, are believed to contribute to these disparities in outcomes. However, even when these caring roles are accounted for, female entrepreneurs still experience less success.

Location an important determinant of success, irrespective of ethnicity and gender

London was found to be the toughest place in the UK to be an entrepreneur, with just 71% of London business owners reporting a profit in 2019. No other region in the UK reported a figure below 80% and the UK average was 84%. A fifth (20%) of business owners in London saw revenue decline last year, six percentage points higher than the UK average (14%). Meanwhile, entrepreneurs living in the South East see most success, with subjective and objective success metrics well above average.
Differences between London and other areas across the UK are linked to a higher density of start-ups in London and tougher market competition. Higher costs of living and operating and greater disparity between poorer and wealthier neighbourhoods also help explain these findings. Only a small share of entrepreneurs run the kind of business that can benefit from the investment ecosystem that London is known for globally.

The report finds that irrespective of ethnicity and gender, household income is crucial to entrepreneurial success. Business owners with an income of £75,000 or more were most likely to report profit last year compared to those on an average annual income of less than £20,000 (87% versus 76% respectively).

Catherine Lewis La Torre, CEO, British Business Bank, said: “As the UK’s economic development bank, we aim to improve access to finance for entrepreneurs so that more people may achieve their business goals and contribute to the country’s economic prosperity in so doing.

“This research provides us with a clear evidence base to help us understand the scale of the barriers faced by Black, Asian and Other Ethnic Minority entrepreneurs, as well as other under-represented groups when starting and scaling their businesses. This research will help inform the Commission on Race and Ethnic Disparities, which we hope will galvanise action across both the public and private sectors to address inequalities which lead to different business outcomes.

“The report identifies access to finance and the opportunity to develop business-relevant skills as being a particular challenge for some groups. To help address this, the Bank runs the Start-Up Loans programme which has been successful in the past in providing loans to entrepreneurs from under-represented groups. The Bank also works to address regional imbalances in access to finance through regionally targeted investment funds as well as our Regional Angels Programme. However, we fully recognise the need to go further and this research provides a vital impetus to act.”

Roianne Nedd, Global Head of Inclusion and Diversity, Oliver Wyman, said: “Entrepreneurship is a career where foresight, innovation, and tenacity should be key components of success in the UK, but our research shows that sadly this is not always the case. What should be a level playing field is littered with obstacles, many of which are products of a complex system of racial and gender disadvantage, underpinned by the pervasive impact of wealth and location.

“Yet there is hope. Our research not only highlights the barriers we must begin to tear down, but also the many factors that can positively shape an entrepreneur’s journey. It’s up to all of us to learn these lessons and act now to affect change.

“Let’s open our networks to entrepreneurs who are different from us. Let’s design financial products that reach people most in need. Let’s take a more thoughtful approach to selecting diverse suppliers. And let’s build support programmes that equip the under-represented with the practical tools necessary to transform their businesses from surviving to thriving.”

The British Business Bank runs the Start-Up Loans programme to help entrepreneurs from under-represented backgrounds start up a business. Of those who received a loan, almost 40% were women, more than a third (36.5%) were unemployed when they applied for the loan and 20% came from Black, Asian and Other Ethnic Minority backgrounds. Of those, almost 10% of recipients are Black, almost 5% are Asian and more than 5% are Mixed and Other Ethnicity.