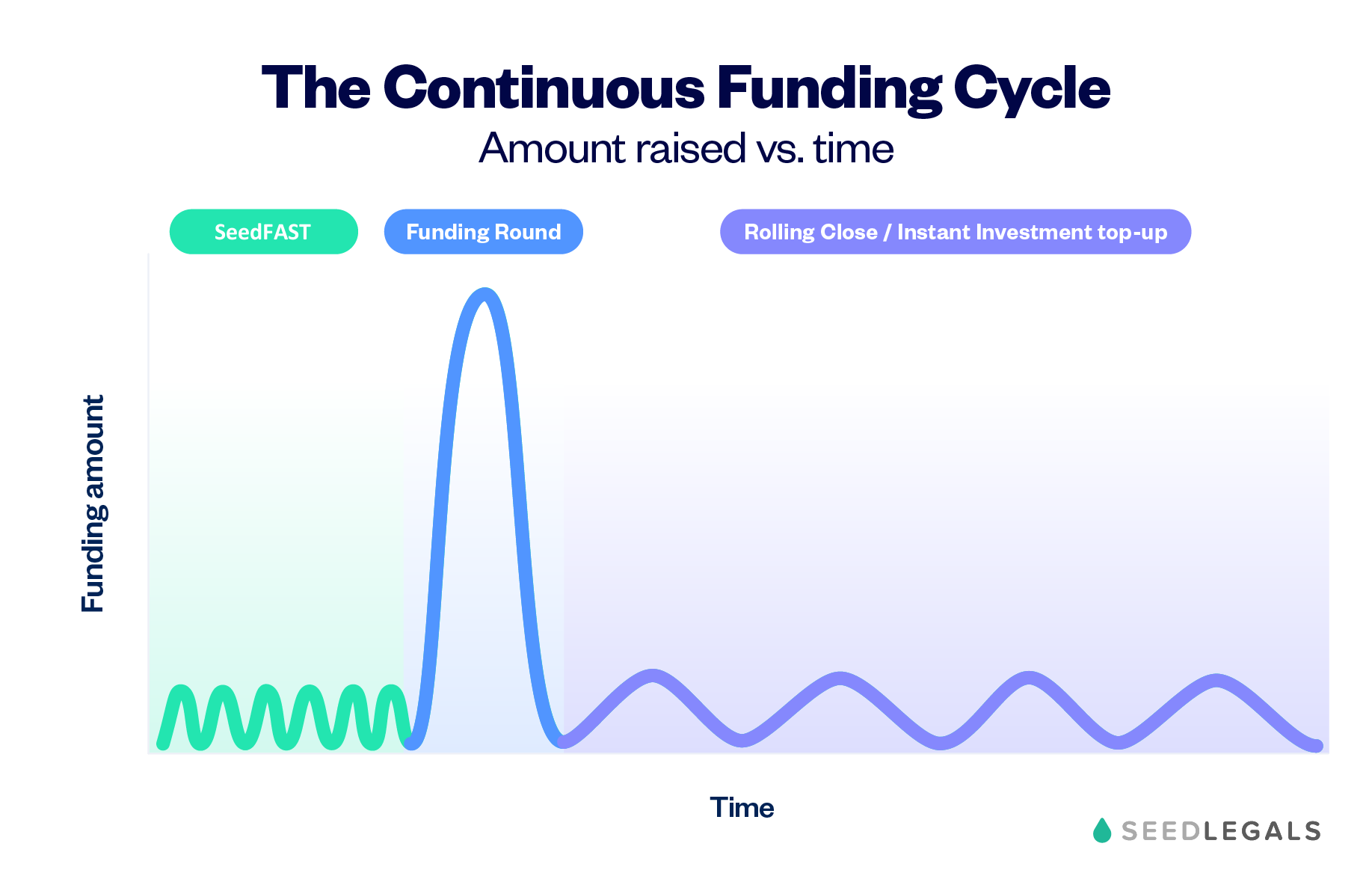 Early stage companies are moving from “go-big-or-go-bust” funding rounds every 12 to 18 months to agile funding where they raise small amounts frequently, taking investment opportunistically (i.e. when you meet someone who wants to invest) and as needed.

SeedLegals is pioneering this change, allowing founders to raise before a round, do a funding round, and top up a round, all in a single seamless workflow.

In the space of just one year since launching agile funding, SeedLegals has transformed the way UK companies are building and growing their businesses. 70% of funding rounds on SeedLegals now include a rolling close as part of their round.

The savviest founders are now using agile funding to grow their business faster, spend less time holding up the business while they look for investment, and give away less equity than founders relying solely on the traditional big-or-bust funding rounds.

Background to the current 12-18 month funding round pattern

Using a law firm to do a funding round legals typically costs £3000 to £20,000 or more and takes 3-6 months. As a result, startups avoid the time and cost of doing a round by raising larger amounts infrequently.

When raising large amounts in a traditional funding round it takes a few months to find all the investors, and then another few months to coordinate the investors, negotiate the deal terms, and get everyone to sign the funding round documents. So, typically 3-6 months for the whole process. That funding round then needs to give the company enough money to grow the business to hit new milestones and get traction – which typically takes another 6 months – before you have to start the process all over again.

And, since company directors don’t want to risk trading insolvent, they want at least 3 months’ cash in the bank to provide a buffer if things take longer than expected, all of which leads to the current 12-18 month funding cycle.

It’s time to change that

This go-big-or-go-bust funding round pattern has a few problems:

Startups are all about being agile. Product development, marketing, hiring, customer acquisition approaches are all agile… 12-18 month funding cycles aren’t. The good news is, that’s changing.

The rise of agile funding

By using technology to reduce the time and cost of doing a funding round by 80%, SeedLegals opens new possibilities for founders. SeedLegals data showed that founders were now using the SeedLegals platform to do lots of small rounds, sometimes instead of, sometimes in addition to, traditional funding rounds.

‚ÄçSeedFASTsare usually used ahead of a round (often ahead of the company’s first funding round) when you don’t want to commit to a valuation (maybe you’re just about to launch a new product, or you’re working on a large partnership deal which will increase your valuation, but you need the money now to get there). They’re also useful as a bridge between funding rounds, when you need money but you’re not ready to do another round at a new valuation.

Instant Investmentallows founders to top up a round. Let’s say you want to raise £500K but you only have £300K of investors lined up. Rather than spending weeks or months finding the remaining £200K, you can close the round now, but set the deal terms to allow you to top up another £200K anytime within, for example, the next 12 months at the same or higher valuation with no further investor consents needed.

Or, even if you did raise the full amount you wanted, why go through another funding round later when instead you can, in minutes, add additional investments on the same deal terms as the last round? And, importantly, you can increase the valuation for those additional investments, which allows you to reduce the amount of equity you need to give away compared to having to raise the full 12-18 months’ runway in one go.

The graph below shows startups are now commonly using SeedFASTs (SeedLegals’ UK equivalent of the SAFE that’s common in the US) to raise investment. Using these agreements allows founders to delay valuing their company for up to 12 months while still being SEIS/EIS compatible.

Fun fact: More investments are now closed at 1AM than at 10AM

It’s clear that evenings are when founders finally get time to work on their funding. Thanks to SeedLegals being an always-on platform, they can now do that. In the past year, more investments were closed at 1AM than at 10AM:

Background to the data

SeedFAST and Instant Investment agreements were released on the SeedLegals platform in April 2018.

The above graphs were compiled using data from hundreds of investments done on SeedLegals over 2018 and 2019.

Given the speed at which companies using SeedLegals have changed the way they raise investment, we would expect many more companies to follow this route.

Who knows, perhaps it won’t be long before the traditional go-big-or-go-bust funding round becomes the exception, not the norm.